What a whirlwind of exciting film festivals it has been! Most recently, we have returned from NEWPORT BEACH FILM FESTIVAL. It was such an honour to be part of this prestigious festival. 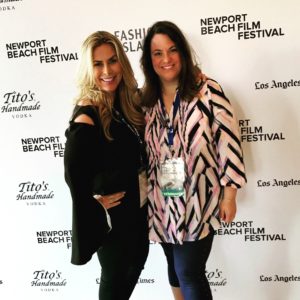 It was such an honour to be part of this prestigious festival. NBFF is known for its dedication to showing a diverse range of studio and independent films. Plus, they showcase a great number of International films. There were Brazilian, German, French, Swedish, South Korean and Italian films, to name a few. It truly had something for everyone. One of the International standouts for us was the Irish Spotlight. Their stories were powerful, heart breaking and so beautiful.

The Festival showed their appreciation to filmmakers by creating two weeks of great programming, enriched with wonderful socials and panels! These events were full of passionate creatives, all discussing the future of film. As for the panels, some of our favourites included, Variety’s Top 10 Cinematographers To Watch. The panel had John Conroy (Penny Dreadful), Mike Gioulakis (Split), Matthew Jensen (Game of Thrones), Kira Kelly (13th) and Toby Oliver (Get Out). They generously shared their insights and talents. The Screenwriting panel was also amazing. Husband and wife team, Bryce and Jackie Zabel gave a compelling discussion around the trend toward screenplay adaptations in Hollywood these days. Academy nominated Nat Sanders of the indie hit Moonlight, offered priceless wisdom in the world of Editing. As you can see, if we weren’t watching films we were learning a ton about the filmmaking process.

There is something to be said for being at a Film Festival where so much diverse international work is shared. We were thrilled to see that NBFF had a strong representation of female directors and writers. The program in which See Me Now, screened in, Femme Factor, featured a powerful range of films highlighting the plight of females in day-to-day circumstances. The work we saw ranged in genre, style and perspective but they all encompassed strong storytelling.

To spend time with our contemporaries was inspiring to say the least. We can’t wait to be at our next festival whether it be The Female Fuse Filmmaker Festival in LA or Palm Springs Shorts Fest Film Market this June or Validate Yourself Film Festival in Brooklyn, New York. One thing we realized while at NBFF is that NOW is definitely an exciting time for female filmmakers!